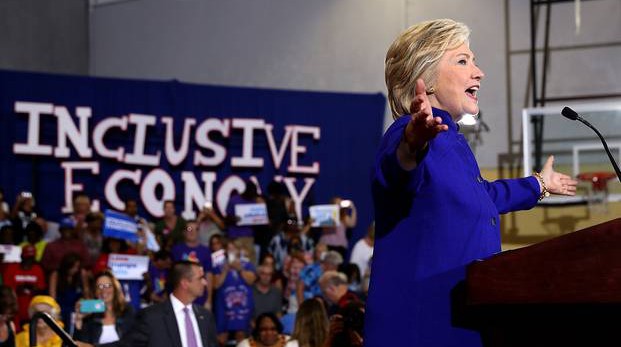 Published by Lauren Appelbaum on September 26, 2016 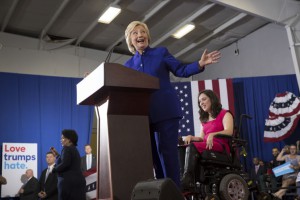 Washington, Sept. 26 – Tonight’s presidential debate will cover three topics, each to be discussed for two 15-minute segments: “America’s Direction,” “Achieving Prosperity” and “Securing America.” As the New York Times explains, “these topics cover a lot of ground and could refer to anything: the economy, national security, domestic policy or the environment, to name just a few.”

The very flexible nature of these topics will allow debate moderator Lester Holt of NBC News to ask about current events and recent topics of conversation. One such topic is employment for people with disabilities, as was highlighted by Democratic nominee Hillary Clinton during a speech in Orlando last week.

Speaking in a packed gym at the Frontline Outreach Youth and Family Center, Clinton pledged to fully support “a group of Americans who are, too often, invisible, overlooked and undervalued, who have so much to offer but are given too few chances to prove it.”

“If you don’t know you know someone with a disability, I promise you, you do,” Clinton added. “But their disability is just one part of who they are.”

Saying that the inclusion of people with disabilities in the economy would be “a vital aspect of my presidency,” Clinton went on to detail a few policies.

First, we’re going to focus on jobs and incomes. I’m going to fight to give more Americans with disabilities the chance to work alongside those without disabilities and do the same jobs for the same pay and benefits. People with disabilities shouldn’t be isolated. They should be given the chance to work with everyone else. And we’re going to eliminate the subminimum wage, which is a vestige from an ugly, ignorant past. Good work deserves fair pay, no matter who you are.

This is not the first time Clinton talked about either of these issues. She talked about the importance of competitive, integrated employment in her response to the #PwDsVote Presidential Questionnaire and first pledged to end sub-minimum wage while speaking at a campaign rally in March.

Second, we’re going to work with our colleges and universities to make them more accessible to students with disabilities. To have a truly inclusive economy, we need a truly inclusive education system. So let’s raise our standards. For too long, accessibility has been an afterthought. Let’s make it a priority in our curriculums, our classrooms, and the technology our students use. It’s like what Anastasia said about her sister. She can communicate through a computer. Then let’s make sure kids who can communicate that way have the opportunity to do so.

Third, we’re going to partner with businesses and other stakeholders to ensure those living with a disability can get hired and stay hired. As part of that, we’ll launch a new effort we’re calling Autism Works to help people with autism succeed in the workplace.

United Nations Convention on the Rights of Persons with Disabilities

Fourth, let’s build on the success of the Americans with Disabilities Act by finally ratifying the United Nations Convention on the Rights of Persons with Disabilities. It has the strong backing of leaders across the political spectrum, and it’s a chance to show American values and American leadership. And I have to tell you ever since I was first lady, I have had the great privilege of traveling the world on behalf of our country. When I was secretary of state, I went to 112 countries. And one of the things that I have noticed is how far behind many countries are in how they treat people with disabilities. Very often people with disabilities from the time they are babies and toddlers are locked away, basically forgotten. I want us since we have been the leader in this area to get that ratified and then to demonstrate to other countries what we have done and are doing to give dignity and opportunity to people with disabilities.

Following the speech, The RespectAbility Report caught up with former congressman and co-author of the Americans with Disabilities Act Tony Coelho, who began working on disability issues with Clinton when she launched her campaign 18 months ago.

“This was an amazing amazing speech,” he said. “It’s the first time in history in our country that a presidential candidate has devoted her speech to us, to our community. That’s exciting. It’s a dream come true and I’ve been working in politics for 50 years.”

Coelho, who has epilepsy, said that Clinton first wanted to address Alzheimer’s disease, then autism, then mental health and now employment for people with disabilities.

Clinton was introduced by Anastasia Somoza, who, along with her twin sister, was born with cerebral palsy. Now a disability rights advocate, she first met the Clintons when she was nine years old. Speaking with The RespectAbility Report after Clinton’s historic speech, which she called “unprecedented,” Somoza credited both of the Clintons with enabling her to achieve some of her success.

“She has supported me not only in the educational endeavors and mental successes, but I would not have had all of the experiences that I got, to prepare me for the workforce, if it hadn’t been for Hillary and President Clinton’s support,” Somoza said.“So to come here today and hear her give the speech 100 percent focused on including people with disabilities in the economy is truly unprecedented.”

During tonight’s debate, when Holt will ask Clinton and Republican nominee Donald Trump questions during the “Achieving Prosperity” section, he has another opportunity to highlight disability employment  in an unprecedented manner. After all, people with disabilities make up the largest minority group in the country, with 56 million people with disabilities seeking information and answers.

One in five Americans has a disability and the majority of voters have a loved one with a disability. In past elections, the disability community has been ignored. But the recent Pew poll shows that voters with disabilities span the political and demographic spectrum and can determine who wins elections.

Early voting starts soon, and many members of the disability community vote absentee. Tomorrow marks National Voter Registration Day, of which RespectAbility is a partner. Interested readers can learn more about how to register to vote and about local volunteering opportunities by visiting Rock The Vote.